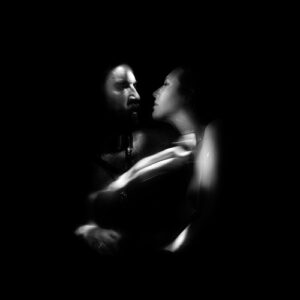 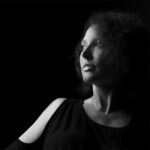 LABOTIV is born from the artistic complicity between Claire Clelia Baldo and Piero Viti. They work together on several series questioning belonging, appearances and human identities, through the “retrahĕre” or portrait. They have a dialectical approach to the diptych, bringing their respective visual worlds into dialogue, using the photographic medium for these projects.
At the same time, they each developed their respective universes but always in complicity.

For Piero Viti, an incursion into the plasticity of Still Lives, inspired by the great masters of the Renaissance; and for Claire Clelia Baldo, a more oneiric exploration, from the rewriting of her dreams to the creation of small theatres allowing their staging. The medium of photography is for both of them a continuation of the creative research process.

Claire Clelia Baldo’s path is divided between Italy and France. Her first experiences are shared between Roman and Parisian influences. She approached art, architecture and cinema already at a very young age. In the years of her formative training, Claire Baldo sharpens the need to understand humanity, the value of the dream, what it means to evade intimately from the self.

To live split between two worlds always entails a certain grade of instability and solitude, even inwardly. The artist looks at reality perceptively, recomposes it sensitively and transcribes it outwardly in images, perpetually in search for that ideal moment where it’s possible to pause for a little while and recognise herself.

The early elaboration of a compositional language of reality, together with the search for a sense of belonging, preserving and recalling past experiences, placing them in space and time and then incorporating them into the photographic image, thus become evidence of Claire Clelia Baldo’s urgency: to give form and full meaning to her own identity, relying on the systematic but poetic use of the fragment.

The choice of the apparent abstraction of the forms, the incessant search for movement in the spaces of the body captured close to their essence, reveal a quality of the real returned through an oneiric transmutation process. As for an alchemist, time is always the key factor to this transmutation.

In Claire Clelia Baldo’s photographic practice, this process takes place through the patient construction of an alphabet made up of complex lines and shapes that have been meditated on and elaborated over a long period of time.
There are influences from the Symbolist painting movement, the art of Japanese prints and cinematic and poetic universes such as those of Cocteau or Fellini.

Before graduating in fine arts from the University of Paris-VIII, Claire Clelia Baldo attended the Academy of Fine Arts in Rome and studied performing arts at the “Cours Florent” in Paris. She specialised in graphic design, a subject she taught for several years in the French capital. She perfected her skills as a graphic designer in London.

In 2016 she moved to Venice where she met the photographer Piero Viti with whom she founded LABOTIV.

By his father Luciano, renowned philatelist, Piero Viti inherits the disciplined attention to details, the care for the particular, concentrating the sight through the apparent configuration of things, the meditated precise observation of reality as well as its images, where the eye becomes a means to scan as a microscope the most intimate folds of everything that it meets.

Driven by his attitude for drawing, Piero Viti attended the Academy of Fine Arts in Venice. He approached theatre to learn the Commedia dell’Arte, the psychology of its characters, the movements and facial expressions of the Zanni on stage, to the point that photographer Marco Bertin chose him as the Harlequin for his refined and controversial book Carnaval (1994), unquestionably one of the most exemplary volumes dedicated to the Venetian event.

As a graphic designer, Viti’s working experiences are with Franco Giacometti at Studio Camuffo in Venice (1985-1989) and agency DPZ in Brazil (1989). Back in Venice, he founds the magazine of culture and politics Nexus, together with Giovanni di Stefano and Andrea Pagnes (1993). In 1998, after his meeting with Pier Luigi Cerri, he collaborated to design the inaugural exhibition at Palazzo Grassi dedicated to the Fenici, thus contributing to the great architectural renovation project entrusted to Gae Aulenti. He continued to work in Verona on numerous projects to promote the image of events until the end of the nineties, before devoting himself exclusively to photography.

Hence, if at the beginning was the line, the talented designer always fascinated by the features of the human faces as if they were proper landscapes, in his mature years Piero Viti selects the camera as his means of expression, as if it concentrates all the necessary tools to the artist, allowing him at the same time an immediate thus endless exploration of the human.

Both in the use of colour and black and white photography, Piero Viti pays particular attention to shadows and light, which tell of his greatest sources of inspiration: Titian, Caravaggio and the Flemish masters, confirming his deep concern for the pictorial composition and the result of the photographic image, to arrive at that moment when the factor of the unpredictable becomes crucial. Ultimately, his photographs leave little room for concessions and hedonistic speculation. Rather, they expose, in their cracks and imperfections, the secret of the subject’s experience.

Privacy & Cookies
To provide the best experiences, we use technologies like cookies to store and/or access device information. Consenting to these technologies will allow us to process data such as browsing behavior or unique IDs on this site. Not consenting or withdrawing consent, may adversely affect certain features and functions.
Manage options Manage services Manage vendors Read more about these purposes
View preferences
{title} {title} {title}
Menu